James is ‘Living With Epilepsy’

Getting my head around it

My body was beaten up but I had a real sense of being under the control of something in my head. I was filled with fear knowing that it could happen anytime.

The doctor lent over his desk, looked over the top of his glasses and said “Well James, you have epilepsy, how do you feel about that?”. I wanted, initially, to let my fists do the talking and show him how this news wasn’t exactly what I was hoping for.

I am not the violent type so I just fumed. I let him explain that many people take this type of news badly and as a consequence need to be referred to a psychologist to help them readjust. It was about six months earlier that the first incident happened.

My dad was woken by a banging coming from my room in the early hours. I was known for keeping odd hours (I was a teenager) so my dad lay there for a moment before realising that this wasn’t just me being inconsiderate but that something was wrong. As he walked in my room I was having a seizure. They used to be called ‘grand mal’ but nowadays are referred to as tonic clonic seizures. My body convulsed and shook like it had electricity being passed through it. With my jaw clenched I struggled unconsciously for breath and my eyes rolled back. Mum and dad stayed with me while the convulsions continued and then after a few minutes they began to ease. The doctor came and even now I can remember the smell of his jacket. I think all doctors over a certain age who wear jackets and have the medical bag have a similar smell. However, I think they say that before or after a seizure your sense of smell can be heightened (don’t quote me, I have it, but I am not a doctor!). The doctor said that I had suffered a seizure but the cause was unclear and at this time no specific medical treatment was required.

I think anyone may have a seizure once and that may not mean you’ll have another, so it was a case of wait and see what happens next. He advised rest and correctly stated that my body would feel fairly battered. To be more accurate I felt that I had been 12 rounds with a pro boxer. My tongue was blood-red with teeth marks and swollen, all my muscles were filled with lactic acid and ached, I mean really ached, and I had a banging headache.

Once the doctor and his strange smelling jacket had left my mum gave me a Magnum ice-cream (a rare treat usually) to reduce the tongue swelling but on this occasion there was no pleasure in the eating. It actually hurt to open my mouth and my tongue didn’t want to be consoled.

Time passed and I tried to shrug off the event and continue on. I was always aware that ‘it’ may return and did do some research on epilepsy, but confident that I didn’t fit the epileptic demographic it wasn’t something I was going to worry too much about. I was coming up to 17 years old so I was concentrating on gaining some financial independence, and keen to have fun with my friends.

About six weeks later it happened again. Much the same situation except this time it was a shorter episode. This time I actually woke up after the seizure (I cannot recall how much longer after) however I was petrified. My body was, as before, beaten up but I had a real sense of being under the control of something in my head. I was filled with fear knowing that it could happen anytime. There was no way I could sleep that night until I passed out with complete exhaustion.

I saw the doctor and he arranged for an Electroencephalogram (EEG) and MRI test. Although my fears were becoming reality, I was also really pleased that questions were hopefully going to be answered. The possibly horrible truth was better than the very scary unknown. The doctor showed me the results of both tests and both were unremarkable. No I didn’t have a tumour, and yes I did have a brain. My poor GCSE results were down to my inability (laziness), not a medical deficiency.

At this point he delivered his diagnosis with all the tact he could muster. Epileptic? What? You said the tests were clear…? How do I feel about it? Come here and I’ll tell/show you! I believe it was this same doctor that told me how epilepsy will affect my life. Specifically, I couldn’t work with children as I could harm them during a seizure. Sports teacher plans out of the window then… no need to aim high with any further academic qualifications.

Despite learning to drive when I was 15 years old (when working on a farm) I couldn’t hold a driving licence of any kind until I had been seizure free for 3 years. Independence denied. Stuck in my rural village for another 3 years (at least).

Furthermore, I had to take pills everyday, twice a day. I was given the standard anti epileptic drug called Epilim. These purple tablets were to be taken every morning and every evening to ensure that the drug remained in my blood around the clock. I really did need to start living by the rules that were being laid in front of me. 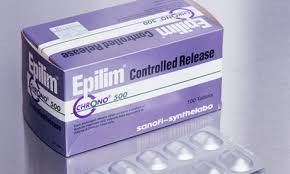 As I walked from the doctors to the car I made a decision. I could either become angry, frustrated and be a victim in this situation, or live to the maximum that I could and endeavour to overcome any obstacle. Well there was no choice so I decided it was time to ‘man-up’.

Later in my mid-twenties, after many seizure free years I had another seizure while I was working for Volvo as a salesman. This was a daytime episode so this meant I lost my licence for 1 year (DVLA were more lenient by now) but importantly I lost my job. I had to reluctantly ‘sign on’ while I had an increase in my drugs and started taking Lamotrogen (also used as an anti-depressant) with my Epilim. As I was keen not to sit about I went to a college for people with disabilities for a year to study Sales, Marketing and Customer Service. The college was residential and was a really interesting experience. Plenty of sex, drugs and rock n’ roll. Well to be honest not so much rock n’ roll. I didn’t seem to fit the demographic there for sure. I spent most of my time as a recluse in my room minding my own business trying to avoid getting involved in the police raids (two in 10 months). There were a lot of people angry at life, frustrated by the limitations of their bodies and many who had also had their lives turned upside down and dreams and aspirations broken. The impact of my disability on me was not as harsh as those experienced by others. I was, and I am, very lucky.

So in conclusion, life is hard, it is full of surprises, some good and some bad. It is my belief that the important thing is how we choose to respond to the challenges that we face. One thing I am reminded of again and again is how lucky and privileged I am. Regardless of what happens I have family and friends that love and care for me, and now as I write this at 34 years old I am particularly blessed with my wife and two children. With this love and support nothing can touch me. Our blessings always outweigh our troubles, sometimes we just need to remind ourselves of that.

Someone who knows more about Epilepsy than me can tell you about the relevance of this diagram. I just like the colours…

It's a bit of this, and a little of that. Nothing fancy. You're welcome to it.
View all posts by James G →
This entry was posted in Uncategorized and tagged Epilepsy, Epilim, Seizures. Bookmark the permalink.